The HKSAR Government will be introducing a Foreign-Sourced Income Exemption (FSIE) regime, with a target enforcement date of 1 January 2023. The new FSIE regime will have a significant impact on the source concept of Hong Kong's taxation system. Hong Kong has long been famous for its territorial-based principle of taxation, in which non–Hong Kong sourced income is not subject to Hong Kong Profits Tax. However, as this could give rise to double non-taxation on a project, such a tax treatment principle is deemed to be harmful to international tax standards and has recently aroused great concern from the European Union (EU).

To address the EU concerns, the HKSAR Government has issued a consultation paper to introduce the FSIE regime, which imposes additional rules on the offshore claims of the following four types of income:

Active income, such as trading profits and service income, are not covered under the FSIE regime.

Base rules under the proposed FSIE regime

By following the approach adopted in Singapore, an income is regarded as received in Hong Kong if:

Protection from double-taxation under the FSIE regime

Under normal circumstances, a tax credit is generally available in Hong Kong in the case of double-taxation issues for Hong Kong's Comprehensive Double Taxation Agreement (DTA) partners. In other words, no tax credit is available to non-DTA partners.

However, if a non–Hong Kong sourced passive income becomes subject to Hong Kong Profits Tax under the FSIE regime, a tax credit will be available in Hong Kong if the concerned income is also subject to tax of a similar nature in other tax jurisdictions, no matter whether the counterparty is a DTA partner or not. The rationale is that the FSIE regime is being enacted solely in response to pressures from the EU, rather than to raise tax revenues in Hong Kong.

As a result, taxpayers who have already paid foreign tax on their passive income should be more relaxed under the proposed FSIE regime.

The basic principle of determining the source of the four types of concerned passive income under Hong Kong Profits Tax is shown below.

Interest income: For simple loan arrangements, provision of the credit test applies where the source depends on the location in which the loan funds were first made available to the borrower. For moneylenders, corporate treasury centres and more complicated situations, the operation test applies. It is worthwhile noting that the Hong Kong Inland Revenue Department increasingly uses the operation test to determine the source of interest income.

Dividend income: As Hong Kong–sourced income is also exempt from Hong Kong Profits Tax, dividend income was 100% non-taxable in Hong Kong before the introduction of the FSIE regime.

Disposal gains: Long-term investment capital gains are non-taxable in Hong Kong, which is the cornerstone of Hong Kong's taxation system. What is uncertain at the moment is whether the FSIE regime will override the capital gains claim benefits of the Hong Kong tax system.

IP income: The contract effected test and the place of usage of the IP are the two traditional criteria for determining the source of royalty fees. Following international practice, the location in which the DEMPE functions (development, enhancement, maintenance, protection and exploitation) of the IP is carried out is now also an important criteria.

In addition to the above current source rule of Hong Kong, in order to pursue an offshore profits claim in Hong Kong, taxpayers also have to fulfil the following rules under the proposed FSIE regime:

All covered passive income received by covered taxpayers not in-scope of the exemption rules are liable to profits tax in Hong Kong.

To fulfil the economic substance rule, covered taxpayers will need to meet the adequacy test, as follows:

Outsourcing of income-producing operations to another Hong Kong company is possible, provided that the taxpayers have control over the outsourced operations' activities.

The proposal does not specify the exact number of employees or the amount of expenses required, but does note that, for a pure equity holding company which derives dividend income and equity interest disposal gains only, the requirements are more relaxed.

Even if the offshore dividend income or disposal gains do not fit the economic substance requirements, taxpayers are still eligible to pursue an offshore claim in Hong Kong when they meet the participation exemption requirements.

Under participation exemption, all of the following rules must be satisfied in order to pursue a non-taxable claim in Hong Kong:

MNE groups very often have complicated shareholding structures, in which the direct investee company of the Hong Kong holding company may not be the operating entity. In the case of dividend income, it is further explained in the tax bill that a "see-through" approach will be adopted, such that the underlying dividends and/or profits of up to five tiers of investee entities will be considered when assessing whether the switch-over rule (Point 4 above) is met. The tax bill does not mention whether the same approach shall apply in the case of disposal gains.

First of all, the exemption introduced in the proposed regime only covers income from patents and other IP income of a similar nature. Other intellectual property, such as trademarks or copyrights, is not applicable to any exemption and, therefore, all in-scope IP income generated from trademarks and copyrights would be deemed as taxable in Hong Kong. However, taxpayers are reminded to go through the base rules of the proposed regime to ascertain whether the IP income is in-scope or not (i.e., if the income recipient is part of an MNE group and the income is received in Hong Kong).

For income from patents, the nexus approach will be used to calculate the IP income qualifying for non-taxable claims under the FSIE regime (that is, in addition to the above source rule requirement). The calculation formula is as follows:

In order to qualify as qualifying expenditure, the location requirement under different scenarios is as follows:

Another important note is that the R&D expenses paid by a Hong Kong taxpayer to overseas group companies are unlikely to be tax-deductible. If the corresponding IP income is not eligible for an offshore claim in Hong Kong, the Hong Kong company may end up having significant Hong Kong Profits Tax liabilities. For further details, please refer to: https://henrykwongtax.com/article/cheng-cheng-taxation-reveals-how-super-tax-deduction-on-rd-activities-in-hong-kong/.

Henry Kwong, Tax Partner of Cheng & Cheng Taxation Services Limited, explains: "Based on our experience, offshore claims in Hong Kong are a significant part of the tax planning of MNE groups, while it is common that these MNE groups may maintain limited or even no economic substance in Hong Kong. As such, we believe that the proposed FSIE regime is going to affect a significant number of MNE groups."

The proposed FSIE regime will require these MNE groups to build up economic substance in order to enjoy preferential tax treatment in Hong Kong. While it may increase the financial burden on MNE groups, the proposed regime can potentially enhance the employment market in Hong Kong. MNE groups currently pursuing offshore claims in Hong Kong are advised to consult their tax advisors to perform a tax health check before the year 2023 and to make the necessary operational reforms. 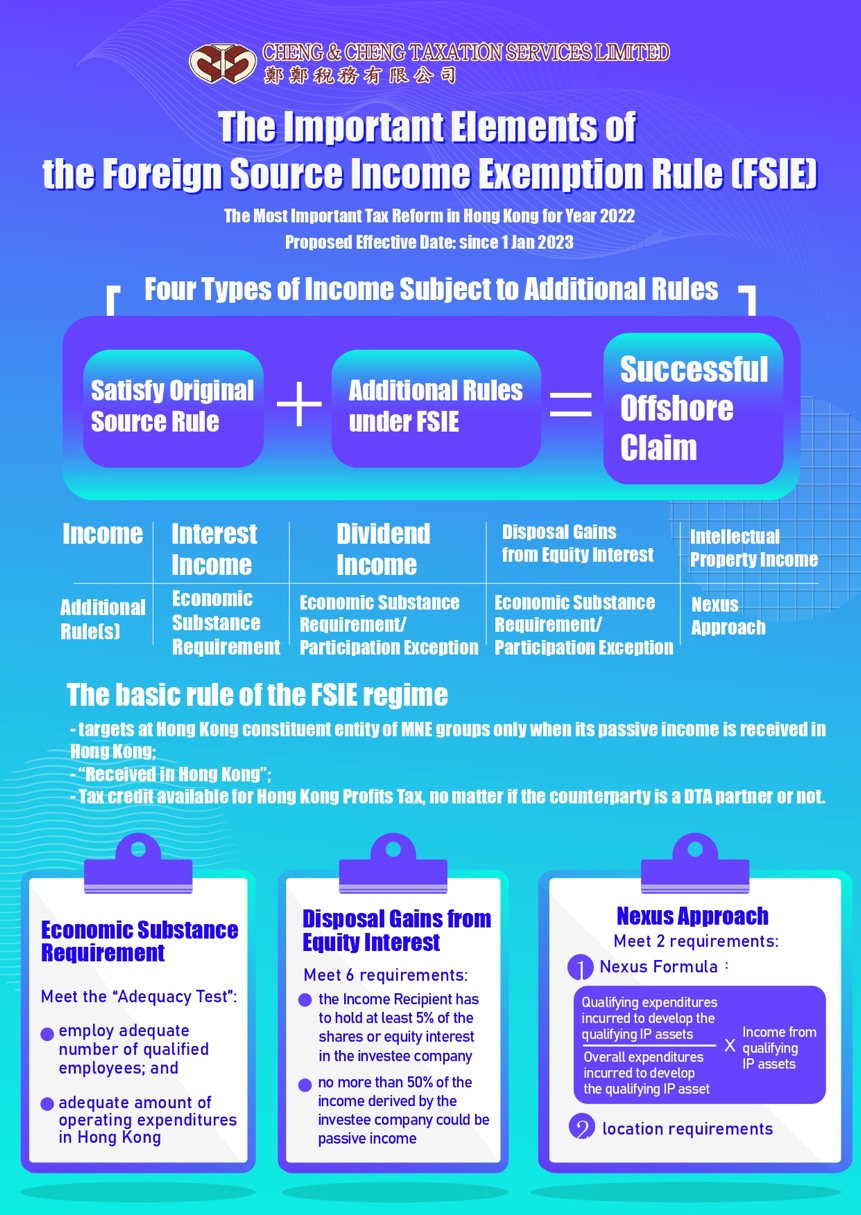 READ it in Yahoo Finance!

to keep up with the latest trends!

keep up with the our latest tax news!

keep up with the our latest tax news!

Please refer to our welcome email sent to your registered mail box for more details.

Henry Kwong and his team

Go beyond fulfilling compliance requirements. observe tax opportunities for you to make the best decisions to your business. Mitigate risks under challenging tax world.

Henry Kwong and his team

Go beyond fulfilling compliance requirements. observe tax opportunities for you to make the best decisions to your business. Mitigate risks under challenging tax world.

Thank you for contacting us.

We appreciate you contacting us. Our colleagues will get back in touch with you soon!

Have a great day!